Three Papers are accepted by ECCV 2018

Recently, three papers, “End-to-end View Synthesis for Light Field Imaging with Pseudo 4DCNN” from Yunlong Wang , “Lifelong Learning via Progressive Distillation and Retrospection” from Saihui Hou and “Towards Human-Level License Plate Recognition” from Jiafan Zhuang are accepted by European Conference on Computer Vision (ECCV 2018), which is one of the top conference for computer vision. 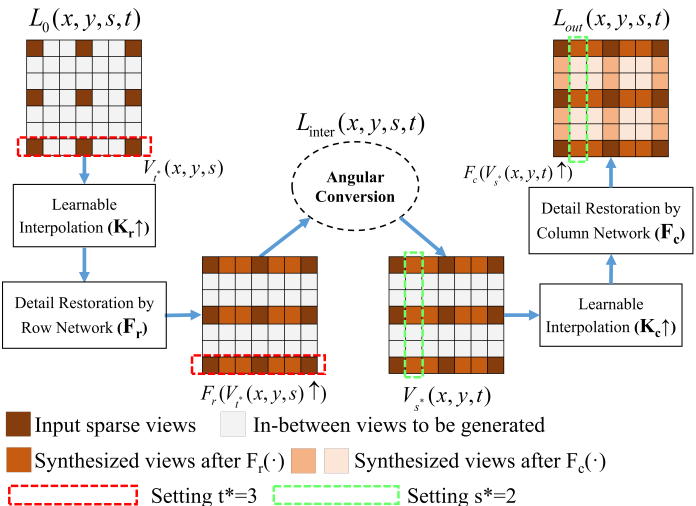 Abstract: Limited angular resolution has become the main bottleneck of microlens-based plenoptic cameras towards practical vision applications. Existing view synthesis methods mainly break the task into two steps, i.e. depth estimating and view warping, which are usually inefficient and produce artifacts over depth ambiguities. In this paper, an end-to-end deep learning framework is proposed to solve these problems by exploring Pseudo 4DCNN. Specifically, 2D strided convolutions operated on stacked EPIs and detail-restoration 3D CNNs connected with angular conversion are assembled to build the Pseudo 4DCNN. The key advantage is to efficiently synthesize dense 4D light fields from a sparse set of input views. The learning framework is well formulated as an entirely trainable problem, and all the weights can be recursively updated with standard backpropagation. The proposed framework is compared with state-of-the-art approaches on both genuine and synthetic light field databases, which achieves significant improvements of both image quality (+2dB higher) and computational efficiency (over 10X faster). Furthermore, the proposed framework shows good performances in real-world applications such as biometrics and depth estimation.

Abstract: Lifelong learning aims at adapting a learned model to new tasks while retaining the knowledge gained earlier. A key challenge for lifelong learning is how to strike a balance between the preservation on old tasks and the adaptation to a new one within a given model. Approaches that combine both objectives in training have been explored in previous works. Yet the performance still suffers from considerable degradation in a long sequence of tasks. In this work, we propose a novel approach to lifelong learning, which tries to seek a better balance between preservation and adaptation via two techniques: Distillation and Retrospection. Specifically, the target model adapts to the new task by knowledge distillation from an intermediate expert, while the previous knowledge is more effectively preserved by caching a small subset of data for old tasks. The combination of Distillation and Retrospection leads to a more gentle learning curve for the target model, and extensive experiments demonstrate that our approach can bring consistent improvements on both old and new tasks.

Abstract: License plate recognition (LPR) is a fundamental component of various intelligent transport systems, which is always expected to be accurate and efficient enough. In this paper, we propose a novel LPR framework consisting of semantic segmentation and character counting, towards achieving human-level performance. Benefiting from innovative structure, our method can recognize a whole license plate once rather than conducting character detection or sliding window followed by percharacter recognition. Moreover, our method can achieve higher recognition accuracy due to more effectively exploiting global information and avoiding sensitive character detection, and is time-saving due to eliminating one-by-one character recognition. Finally, we experimentally verify the effectiveness of the proposed method on two public datasets (AOLP and Media Lab) and our License Plate Dataset. The results demonstrate our method significantly outperforms the previous state-of-the-art methods, and achieves the accuracies of more than 99% for almost all settings.